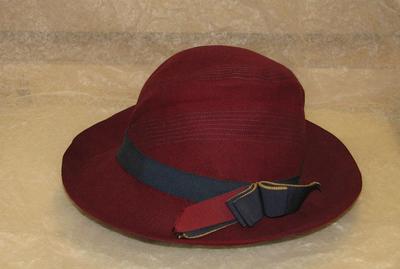 Production date
1950-1960
Description
Wine coloured felt hat. Made late 1950's to early 1960's. The hat has a high crown square at the front end rounded at the back. It has one band of seven and one of six rows of blue top stitching around it. There is a band of blue petershem around the lower brim. It forms a stylised bow at the c/f with a piece of yellow and a piece of wine coloured petershem added in. The brim is narrow at the back and wide at the front. There is a bed of wine coloured petershem on the inside of the lower brim. The label reads. 'A Lincoln Bennett Hat'. Lincoln Bennett were in business from 1863-1966 and seem to have had shops in a few cities including Glasgow in St Anne's Square.
See full details