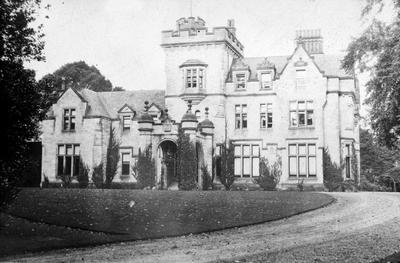 Description
Dated 1897. "Jacobethan" style mansion with port-cochere by James Thomson, Architect.
Internally, the main feature is the oak-panelled hall and stone stairway. Over each of the doorways leading off the hall is an appropriate inscription for the use of the room beyond. Thus, for example, the library inscription reads "Learn to Live, Live to Learn". The doors themselves have linnen fold decoration on them. The stair may have been re-used from the older house. The lower flight is of grey freestone and rises to a small landing. It then divides into two short flights at right angles to ascend to two further landings. These each turn back on the main flight and ascend to the first floor level. The stair is lit by a large skylight. Opposite the lower flight of stairs, beyond the small landing, is a Minstrel Gallery.
The large drawing room has boxwood pilasters with geometric marquetry.
The dining room has a coffered ceiling with panels. An oak framed beam cotains carved eagle in the spandrels.
See full details

Site history notes
For the early history of the estate see Kinnaird House I.
Kinnaird House was sold in 1895 to Robert Orr, who built the present mansion dated 1897. Robert Orr died in 1906, but the Orr family kept ownership until the late 1930s. During the Second World War it was used as the headquarters of the Polish Army. It then came under the control of the Secretary of State and was used for various purposes, the final one being a store for hospital emergency supplies.
In 1977 it was purchased by John Findlay Russell.