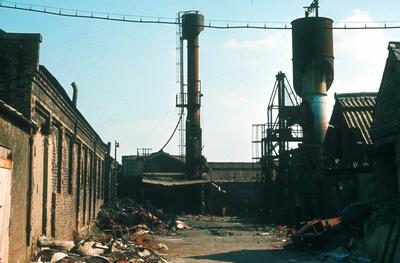 Site history notes
Founded in 1904 by William Ross Lane at the Milnquarter Foundry in Seabegs Road. In 1914 the partners in the firm were William Lane and James Ferguson. They made stoves, grates, rainwater goods, etc. A new joint stock company was registered in 1919 under the name of Messrs Lane & Girvan Co with the aim of taking over the adjacent Caledonian Stove and Iron Works. The partners in the new firm were William Ross and James Ferguson. In 1960 Repla Foundry Ltd of Staffordshire took over, and the firm became Lane & Girvan (1961) Ltd. They received orders from the Bathgate vehicle works. In turn were taken over by Midland Industries in 1967, and Repton Foundry (Scotland) Ltd in 1972. The works closed in 1977, and part is now occupied by the Direct Works Dept of Falkirk Council, and by Clan Storage. 1913- 120 employees.