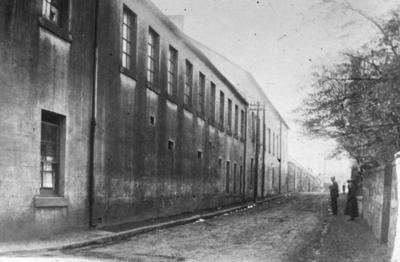 Site history notes
In 1874 a new foundry was erected opposite to the Columbian Stove Works by the partners in that works, then known as Ure & Co. These were Ure, Smith & Wellstood. It was mutually agreed that the Bonnybridge Foundry should be owned and run by George Ure and his family to produce sewing machines and general castings, while the Columbian Stove Works would continue to be owned by the partners of Ure & Co and produce stoves and ranges. In 1873 Smith & Wellstood bought the Columbian Stove Works, and the name of Ure & Co changed to George Ure & Co, who still possessed the Bonnybridge Foundry. However, in 1882 Singer's Sewing Machine Co and Messrs Davidson of Belfast built a factory of their own at Clydebank. This greatly reduced the production at the Bonnybridge Foundry. They continued to produce other castings, such as piano frames, but there was not sufficient business. Consequently George Ure & Co amalgamated with Smith & Wellstood in 1890. 1879 400 employees.