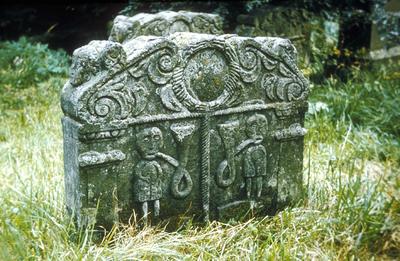 Description
The old churchyard lies around the church itself. On the S it is bounded by the Manuel Burn, to the W it has been truncated by the construction of the Union Canal in 1820, and on the N and E by an old track.
See full details

Site history notes
From its foundation, some time in the late medieval period, the church would have provided the focus for burials. Indeed, in 1454, it was noted in a petition from rankine Crawford of Haining that the church or chapel of Manuel had from time immemorial had a burial place. Few of these burials would have been marked in stone, and it is probable that the wealthier landowners preferred interment in the private burial ground of the nearby priory. By the sixteenth century the prominent citizens of the community would have been buried inside the church with their gravestones paving the floor. These were swept away during the rebuilding programme of 1806. Of the surviving stones, the oldest is a flat stone dating to 1697. The next is from 1705, with several in the 1720s. However, through stones are mentioned in the Session records in the 1670s. During the time of the Resurrectionists a small watch-house was erected by the entrance. Use of the churchyard continued until 1893, when it was finally closed in favour of the cemetery to the north. This in turn was extended in the 1930s.