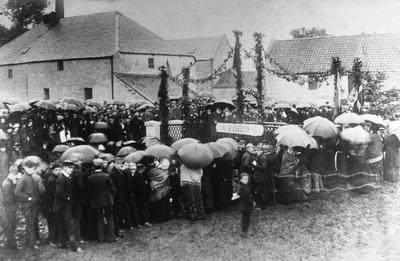 Description
Located near the ford at Bonnybridge.
See full details

Site history notes
Stone mill buildings erected in 1754 and used for milling grain. It was known locally as Cousland's Mill. In 1920 it was bought by John Struth to manufacture poultry and pigeon feed. A severe fire in 1935 gutted the building. It stood as a shell until 1968 when it was demolished.
From 1792 comes mention of "the Flour Miln at Bonnybridge". The location is narrowed in 1802 with "the Flour Mill at Bonnybridge on part of the 50s land of Catscleugh called Water of Bonny". This removes any doubt that it was the property known generally as Ford Mill. In 1841 it was reported that "a considerable wheaten, flour, oatmeal and pot-barley mill, with a small sawmill, were built, some time since, at Bonnyford, in the eastern extremity of the parish. The waters of Bonny not furnishing adequate power for meeting the demand of manufacturies here, a steam engine is erected and put to work, when necessary." Both the flour mill and sawmill are shown on the 1865 OS. It continued in use into the 20th century.