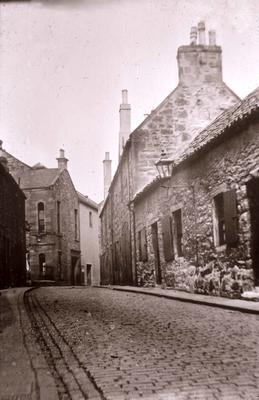 Site history notes
The Erskine movement started in Scotland in 1737. The following year Falkirk formed a congregation. In 1739 the first meeting of elders was held at Lochgreen, then at Woodend, Easter Seamores, Randiford and Falkirk. Land was acquired in 1742 from Alexander Johnston in Horsemarket Lane and a meeting house built with 950 seats. The building was plain and unplastered with an earthen floor. A loft or gallery was reached by internal stairs.
In 1817 the meeting house was remodelled. It was widened by 12 ft, the walls and gables built of a sufficient height to admit a plastered ceiling, and new enlarged galleries. The ground floor was also raised. During renovation work meetings were held in the adjoining churchyard with the sacrament being dispensed in the West Church. Cost c£1,000 and seated 1258.
1878: William Black advised the demolition of the old manse. This was done and he designed a church hall with vestry, two waiting rooms and an entrance hall. The iron gate for this was donated by Baillie Mitchell of Grahamston Iron Works.
In 1903 a new site was acquired for a church at the junction of Cockburn Street and Hodge Street and this opened in 1905.