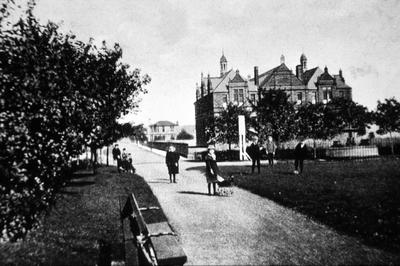 Description
Ornate fountain.
The fountain was erected near to the entrance of the Public Park in Grangemouth (now Zetland park) in 1882 and moved in the early 1920s when the park was extended and the war memorial built. At that time it was surrounded by a cast iron fence.
It takes the form of a large circular cast iron and concrete trough set on a stone base with a central pedestal. The base has four courses of ashlar masonry above a chamfered plinth course. Two steps at opposite ends provide access to small cast iron side bowls raised in fretted arched frames with scrolled feet mounted on the rim of the trough. Four cast iron winged angels kneel at the base of the central pedestal with their arms clasped over their bosoms. Each has two mermaid-like tails.The pedestal has two trumpet flower offsets and then a large open bowl with a beaded rim and intermittent leaves. Originally a further tier above this supported another large bowl and a figurine, but these are now missing.
The ironwork is painted black with gold highlights.
See full details