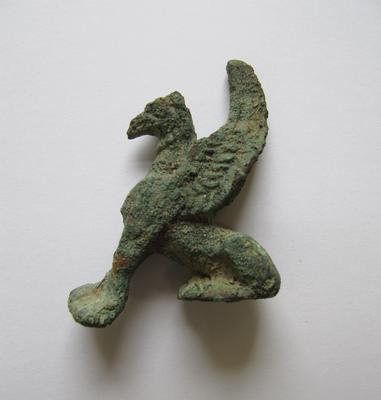 Description
A very fine piece of Roman art in the form of a copper-alloy figurine of a griffin. Acquired with the aid of a grant from the National Fund for Acquisitions.
The copper alloy statuette of a seated griffin has raised wings. The piece is well-modelled in some detail, with three sets of wing feathers, a ruff of feathers around the neck, and well-defined musculature. The front legs are cast in one but modelled in relief to give the clear view of two legs. No tail is shown, and the griffin’s gender is not made clear.
It is in good condition apart from surface corrosion; once the granular corrosion is cleaned should be a spectacular piece of Roman art. Ears damaged, and front feet twisted, presumably from removal of the statuette from its setting. The wings have been clenched together. Attached to a flat surface by pegs in two conical holes, one under the rear legs (depth 8mm), one under the left paw (depth c 3 mm).
Note by Fraser Hunter: "Once conserved, this will be one of the finest pieces of small-scale Roman art from the Scottish frontier. It is very classical in form, well-modelled and well-preserved. It is not clear what it once attached to; the flat rather than curved base rules out a helmet fitting. Such mythological figures could have served as guardians on a wide range of items, from furniture fittings to vehicles. An initial search suggests British parallels are rare: there are none in Durham’s (2012) catalogue of figurines from Britain, nor in the PAS database, but a closely similar example has been found near Vindolanda (Breeze & Bishop 2013, fig 32). No detailed search has yet been made of Continental parallels.
References
Breeze, D J & Bishop, M C 2013 The Crosby Garrett Helmet. Pewsey: Armatura Press
Durham, E 2012 'Depicting the gods: metal figurines in Roman Britain', Internet"
See full details