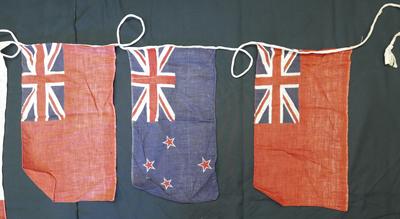 Description
Two strips of bunting set out with the Red Ensign, New Zealand as small flags and a large White Ensign and Union Jack. It was used locally from 1930s-40s it was used for the end of the war and at fayers. It was originally used at a house in Carronvale Road, Larbert. Laterally it seems to have been used for the Queens Diamond Jubilee (2012) at the donors home.
Red Ensign used by Merchant Navy and some civilian ships from 1801 onwards.
White Ensign used by Royal Navy from 1801 onwards usually on ships with HMS. Also used by Royal Yacht Squadron.
See full details