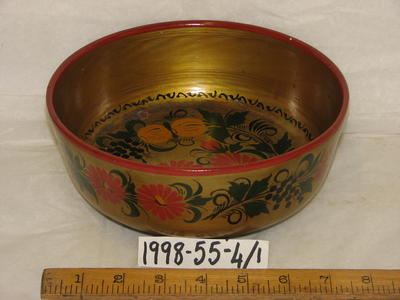 Production date
20th Century
Description
Two turned wooden bowl, painted with a pattern in which the background colour of gold predominates. Later in date than 1998-55-1=3.
This type of varnished wooden bowl came from Russia along with pit props for the coalmines of Central Scotland. Known in Russia as Khokhloma ware.

There are various origin myths about Khokhloma painting but most think it emerged in the 17th century in the Nizhni Novgorod region with some saying in the town of Semyonov. One of the main producers today. The pieces are made from wood, linden, beech or birch which is caved or turned on lathes then dried in kilns. They then have liquid clay rubbed onto them then fired again. After that oil (traditionally linseed oil but laterally synthetic oils) are rubbed on them several times until they are glossy and then left to air dry. The gold colour (sometimes silver) is obtained by metallic powders (modern one use aluminium the older ones tin or even silver) being used to coat the wood and then fired again. When they come out of the kiln they look like metal. They are then pained and finished with coats of clear lacquer.
See full details