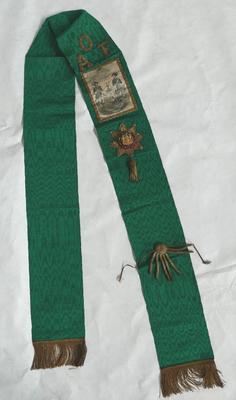 Description
Sash of the Ancient Order of Foresters. Green taffeta with gold wire thread, and a black and white panel. The label depicts an eye overlooking two foresters supporting a coat-of-arms. One of the foresters carries a bow and is accompanied by a dog, whilst the other sports a club and is accompanied by an over spilling cornucopia. Both foresters wear sashes. The same motif is displayed on a raised boss contained in a star design. "UNITAS BENEVOLENTIA ET CONCORDIA" meaning unity, benevolence and friendship.
The Ancient Order of Foresters had its origins in Yorkshire in the 1790s. In 1892 it was opened to women and had female courts.
See full details