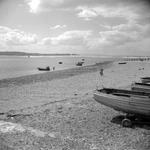 Maker
John Peat Munn
Production date
Jun 1957
Description
Text on negative envelope reads 'Findhorn. Findhorn River Estuary. Salmon Fishers coming in with catch. Culbin Sands in distance'. View of rowing boats by the water's edge, some being rowed and others moored. Other boats are hauled well up the beach. They are on trolleys and are wooden clinker built boats with transom sterns. There are sands in the distance. The location is at the mouth of Findhorn Bay, opposite the Culbin Sands.
See full details