Biography
Robert Adam (1799-1867) was Provost of the Burgh of Falkirk for fifteen years. He was an apprentice with James Aitken, WS. He completed his legal apprenticeship with Russel & Aitken before going on to become provost for the court. He was a member of Falkirk Parish Church. Provost Adam was an agent for the Liberal candidates for for County and Burgh representation. After being Provost for seven years he was presented with a life sized portrait of himself along with a lavish bracelet for his wife. He retired after thirty years service. 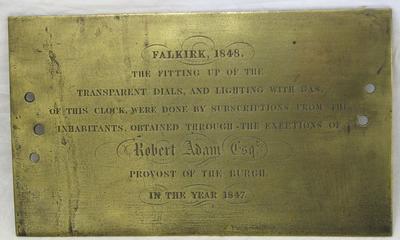