Biography
A. Laurie & Sons was founded in Camelon in 1846 by Alex Laurie for the manufacture and repair of horse drawn vehicles. It employed various tradesmen, such as cartwrights, blacksmiths and coachpainters. Alex Laurie had three sons. Over the years motor vehicles replaced horse drawn ones. This opened up a large market for the manufacture of specialist bodywork. A range of commercial road trailers was offered to cope with all types of haulage. In 1967 the firm left Camelon and moved to a larger (36,000 sq ft) factory at Bankside. In the mid 1970s an amalgamation took place with Thompson Caravans, which continued until 1982, when Thompson decided to cease caravan production and close down other group companies. 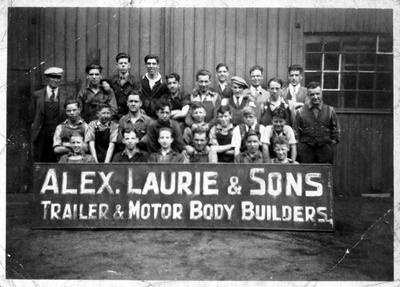