Biography
Captain Harcus Strachan had immigrated from Bo'ness to Canada by the time WWI was declared and thus enlisted by joining the Fort Garry, Canadian Cavalry. In the early years of the war he was awarded the Military Cross for "conspicuous valour": on a cold and snowy day, 27 March 1917, Lt. Harcus Strachan was awarded a Military Cross for his actions at Somerville Wood. It was for bravery at the Battle of Cambria on the 20th November 1917 that Lt. Strachan received the Victoria Cross. Having taken command of the regiment when his Commanding Officer was killed Lt. Strachan killed seven of the enemy with his sword, destroyed an important gun emplacement, cut communications and returned to his lines with prisoners. Prior to winning the V.C. Harcus Strachan was initiated into freemasonry at the Douglas Lodge on 22nd January 1917. It seems that Harcus made the rank of Major by the end of WWI, but also saw service in WWII where he had the rank of a Colonel. 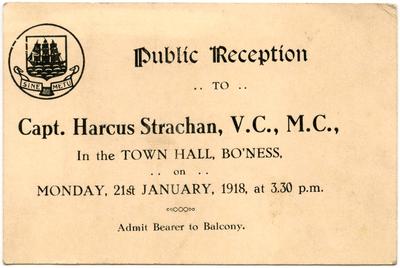 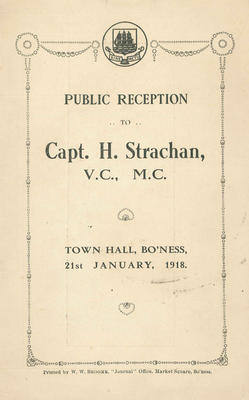