Biography
The Poor Law (Scotland) Act, 1845 (8 & 9 Vict. c. 83) established parochial boards in all of the parishes of Scotland. The Act also established a Board of Supervision in Edinburgh with wide powers of control over the parochial boards. The constitution of the boards in rural areas depended on whether or not they imposed a poor rate. If they did not, they would be composed simply of the heritors and members of the kirk session; if they did they were required to add to the heritors and kirk session a varying number of members elected locally. Only a minority of parishes were legally assessed for poor rates in 1845 but the situation gradually changed and in 1862 only a minority of parishes did not impose a rate. The entitlement to relief remained unchanged and was limited to the aged and infirm. Each parochial board was compelled to appoint an inspector of the poor who was in charge of relief. Other functions were added to the parochial boards' duties including those under the Public Health (Scotland) Act, 1867 (30 & 31 Vict., c. 101) which delegated responsibilities for the regulation of lodging houses, removal of nuisances, construction of sewers, water supply and the control of infectious diseases. They were given the power to appoint medical and sanitary inspectors and to form special drainage and water districts. The public health powers were transferred to county councils by the Local Government (Scotland) Act, 1889 (52 & 53 Vict., c. 50). Special drainage districts and water districts were transferred to sub-committees of county councils. Parochial boards were replaced by parish councils in the Local Government (Scotland) Act, 1894 (60 & 61 Vict., c. 38). In 1894 Parochial Boards were replaced by elected Parish Councils, but the successor bodies frequently continued to use the same minute books and other records as their predecessors. Falkirk Poor House was opened in 1850 and accommodated poor from Falkirk and surrounding parishes. The building was replaced by Blinkbonny House in 1905, which subsequently became Windsor Hospital and was demolished in 1991. The original poor house became Woodside Home in 1905 and later was used as the County Trades School before it was demolished in the 1980s. 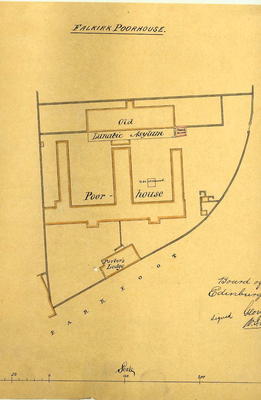 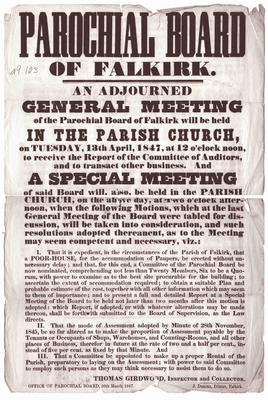