Biography
St Modan's was a Chapel of Ease set up from Falkirk Parish Church in 1897. However, the congregation was actually made up of most of the members and adherents of the Falkirk Evangelical Union Church who along with their minister Rev Robert Winchester Jackson, were received into the Church of Scotland. The charge was disjoined from Falkirk and erected a quoad sacra parish on 16 March 1923. The congregation united with Falkirk Old on 2 October 1986 and the building was sold. [Source: Fasti of Church of Scotland) Duncanson's congregation, still meeting in Bank St, left the Evangelical Union and was unattached to any denomination until Duncanson emigrated to America in 1852, at which point the congregation became part of the Congregational Church. When the Congregational Church and the Evangelical Union united in 1897 the Bank Street congregation chose to enter the United Presbyterian Church instead and became St James UP Church. Most of the members and adherents of the congregation entered the Church of Scotland in 1897 along with their minister, the Rev Robert Winchester Jackson, and formed the new St Modan's Church which was a Chapel of Ease set up from Falkirk (Old) Parish Church. 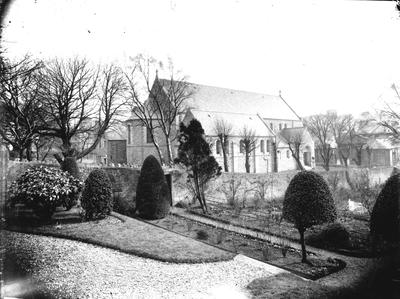