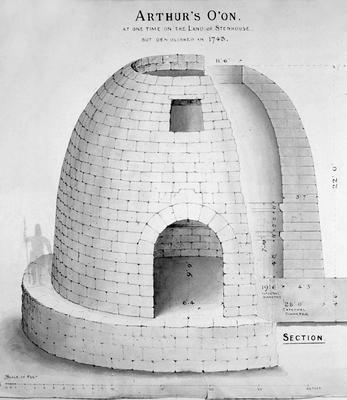 Description
The site of Arthur's O'on is situated on the N side of the road from Carron to Stenhousemuir, opposite the NW corner of Carron Iron Works and just inside the grounds of Stenhouse. The building was destroyed in 1743 and the stones reused to construct a river dam. No contemporary literary sources document the building of Arthur's O'on. It was built of dressed freestone and shaped like a beehive; circular on plan with a domed roof. There is confusion as to whether there was mortar between the stones. The internal diameter measured 5.94m and the external diameter was 8.53m. The O'on was over 6.70m in height. An aperture in the centre of the roof measured 3.5m, but may not have been an original feature. At its base, the walls were about 1.22m thick, but narrowed as they rose. The doorway was round-arched and measured c2.74m in height by 1.52m wide; it was situated on the E side. Immediately above it was an almost square window. This structure is said to resemble the Pantheon. On the interior were carvings of eagles and Victories. The date and purpose of this structure have been the focus of debate. The O'on is certainly Roman: it is situated in an isolated position 3.22km from the nearest Roman road or fort; it faced E in accordance with ritual practice, and a brass finger was found in the masonry which had presumably been torn from a cult statue. The building is likely to have been either a temple, a triumphal monument or some sort of "lighthouse" or landmark, since it appears to have been visible from the Antonine Wall and from the River Carron. A similar domed structure is depicted on a broken relief from Hadrian's Wall. Another structure near Carlisle also took this form. Following the destruction of Arthur's O'on, a life-size replica was built and used as a doocot by Sir John Clarke of Penicuik.
In the 1860s the Society of Antiquaries searched in vain for the foundations of the O'on. Likewise in the 1950s Doreen Hunter failed to locate the structure before the building of Adam Crescent. In recent years it has been claimed that ancient structures have been observed in the garden of Number 40 Adam Crescent, but this has not been verified.
See full details