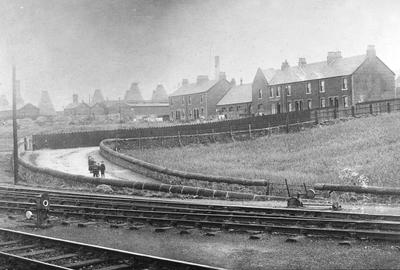 Description
(See also Bonnymuir Brickworks). Situated at the junction of Bonnyhill Rd and Broomside Rd, to the S of the Edinburgh-Glasgow Railway.
See full details

Site history notes
The Bonnyside Brickworks at High Bonnybridge were started by Robert Dougall in 1896 in partnership with George Dougall. Robert had assisted George Turnbull, his uncle, at the brick and tile works in Bonnyside Road (also known as Bonnyside or Bonnymuir Brickworks) since 1892. Robert died in 1912.
In 1955 a major expansion was undertaken involving a large new shed for the production of special refractory bricks. This may have been when the tunnel kiln was built, as a tall chimney was required. In 1967 the firm was taken over by Dyson Refractories Ltd.
Closed down in June 2002 as the works had become unprofitable due to foreign imports. At the time their was only an estimated 7 years clay left.